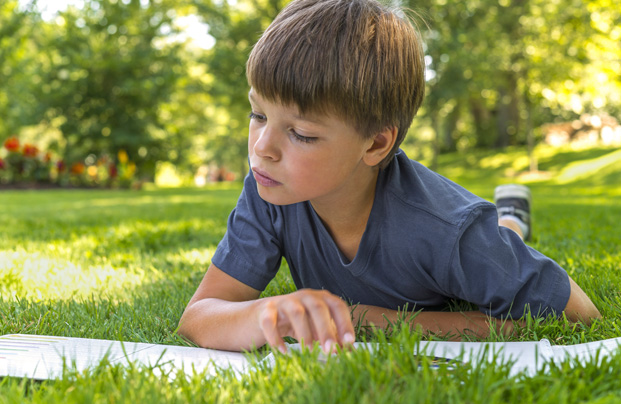 In this classic Miss Marple mystery, one of three murder victims has rye grass in his pocket. Gradually, Miss Marple relates that victim and the two others to the beloved nursery rhyme, “Sing a Song of Sixpence.” Read the book to find out which characters represent the king, queen, and maid in the children’s chant. What other pieces of nursery rhymes have you heard in other contexts?

The relationship between Griffin and Sabine begins as Sabine comments on one of Griffin’s enigmatic postcards. A playful but sometimes obsessive back-and-forth continues with more postcards and missives in tiny pocket envelopes. The artistic styles of each correspondent are different; how do you know who is writing what? Have you ever received messages that you could identify just by the handwriting or drawing style?

Young Bobby has trouble reconciling the fact that he loves sports, but he’s also gay. Although members of his team find out about his preference and have different reactions to his “coming out,” Bobby continues playing and helps the team when they are vying for a championship. Why does Bobby’s coach insist he is not really gay? How does Bobby finally become accepted by his father, his team, and his community? Why do they use a pocket as the metaphor in the title of this book?

Four close friends come to adulthood in different ways, but their friendships continue when they share a pair of thrift store jeans, pockets and all. Each girl has her challenges, self-image problems, and personal growth issues to go through, but when each girl receives the pants in the mail from another friend, the jeans magically fit, and the problems resolve, at least somewhat. This book is best for mature teens because of some sexual content. Have you ever shared an item with a friend? What did it come to represent?

For harmless but fun pranks and other recipes for mini-trouble, try this different approach to a how-to book. Codes, jokes, quizzes, and other amusing activities fill this well-written and complete approach to self-made entertainment.

Activities for this Theme

Make a pocket apron with a pot holder as the pocket.

Make a cell phone pouch to keep your phone safe

Make a tote bag out of old blue jeans

Have a pocket book-making party with family or friends

7 Poem in Your Pocket Day ideas

Have books available and visible in every room of your house so that the children will know reading is a big part of life. Try making a book display to fit this month's theme. Maybe add a few drawings of the FACES of your family as they read (drawn by your children, of course!).